Okay, so yes it is August 23rd, and yes this is a review for Junes Zamplebox but that's because I've been busy doing my YouTube reviews and Junes box slipped the list! Sorry! I have also recently started working in a vape shop and my routine for reviews has been messed up with that but I am slowly getting round to my review list of what needs doing and to start it off I thought I'd do this review! I have actually just received July's Zamplebox with the new menu and packaging since this and Augusts box has just been shipped from America so get ready for some Zamplebox review bombardments!

I received Junes box and the first thing I noticed was that they had changed their packaging! It is now a more sleek, professional looking box with better packaging inside for the bottles.  The bottles now come in cutout foam inserts so they're wrapped in protective sponge and are on two layers in the box.

In Junes box I received the following eliquids..
I was pleasantly surprised to see one or two of these liquids in my box as I had heard god things about them, these were Mad Mikes and One Up.  On the other hand I had received another Eve eliquid which after the last two I really didn't want to try it!  I had also received two liquids that were in my previous Zamplebox which were D Squared(Gritz) and Transit Vape(Toll Road) this wasn't a big deal as I really enjoyed Gritz the first time but Toll road wasn't amazing! Lets start the liquid reviews, I am going to keep these short and simple unlike my other in depths Zamplebox reviews.

Legit - The Nuts
Aroma from the bottle - A similar aroma to the Mad Mikes eliquid, except slightly more berry smelling rather than citrus.
Inhale - A very nice fruity/berry like hard candy flavour almost like skittles.
Exhale - The exhale is pretty much identical to the inhale.
Overall thoughts -  Decent flavour, a very nice rounded candy flavour.

Stellar - Zenith Cookie
Aroma from the bottle - Basically smells like the title of this juice, Cookies.
Inhale - A very sugary cookie dough like flavour.
Exhale - Slight hint of cinnamon on the exhale
Overall thoughts -  The mixture of the cinnamon and the sugar cookie dough inhale makes for a nice dessert vape.

Eve - Lake Custard
Aroma from the bottle - A very sickly, rich custard.
Inhale - Very very sweet custard, quite a light custard but with a rich caramel flavour.
Exhale - On the exhale you get a more creamier note to blend it all together.
Overall thoughts -  After the previous Eve liquids this one was the one I didn't think I would like, I was pleasantly surprised and this tuned out to be a very nice, smooth rich custard vape! 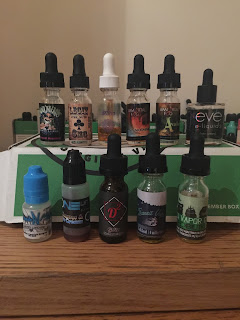 Aroma from the bottle - Slightly similar candy smell to the first two liquids but with something completely different in there also.
Inhale - A sweet creamy inhale
Exhale - A cookie dough like flavour comes through on the exhale.
Overall thoughts -  The overall vape on this liquid reminded me slightly of Ben & Jerry's Cookie Dough ice cream.

Immortal Fog - Avalon
Aroma from the bottle - There is only one word to describe the smell from this bottle. Refreshers.
Inhale - A candy like strawberry and banana maybe?
Exhale - More sour fizzy notes come through on the exhale
Overall thoughts -  This flavour didn't last long for me! It was exactly like vaping a refreshers sweet bar!

Lost Boys Vapour Co - No Credibility
Aroma from the bottle - Caramel, Pear, Pastry
Inhale - The inhale is that of a glazed pear
Exhale - Slightly burnt pastry with more sweet gazing and the pear
Overall thoughts - This eliquid is okay, not the best blend of flavours.  The pear could have been juicier instead of muted by the glaze and burnt crust flavours.

One Up - Churros & Ice Cream
Aroma from the bottle - Cinnamon and Creamy Vanilla
Inhale - Sugar. Lots of warm fried sugar and the nicest cinnamon churro I have ever vaped!
Exhale - The exhale is packed full of smooth vanilla ice cream which is amazing!
Overall thoughts - The inhale is nice, the exhale is even nicer! Together this makes for the perfect dessert vape! The title of this juice described everything about this liquid.  This is my favourite by miles in this box!

Smoke n Mist - Cherry Limeade
Aroma from the bottle - Cherries and citrus notes.
Inhale - A very pleasant cherryade drink flavour
Exhale - On the exhale through the nose you get a subtle hint of the lime in the mix.
Overall thoughts -  Over time this slowly got better, you could taste more of the flavour notes and it ended up vaping like a very refreshing drink.

D Squared - Gritz
Aroma from the bottle - Caramel/Honey, Fruit
Inhale - A nice, sweet caramel/honey flavour
Exhale - A subtle melon flavour cuts through with the caramel.
Overall thoughts -  The actual flavour of this eliquid is Honeydew melon.  It is quite a sweet vape but the melon tones it down slightly.

Transit Up - Toll Road
Aroma from the bottle - Candy Strawberry
Inhale - A bland, muted strawberry flavour
Exhale - Slight hard candy flavour with a hint of citrus.
Overall thoughts -  The inhale and exhale combine to create a decent sweetie like vape.