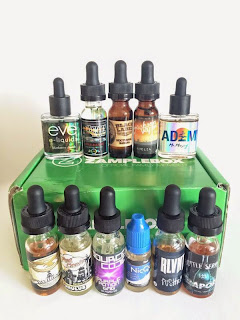 Since I enjoyed last months standard subscription of Zamplebox(6 bottles) so much, I decided to upgrade to the gold package (11 bottles). I found myself running out after 2 weeks or so which meant that I had to go out and buy extra liquids to last me the next few weeks, till this months box arrived. I received yet another green box nicely design with a slightly different piece of vaping art on it compared to the March box. First thing you find inside are more coupon codes like last months for some of the liquids inside of my box, a Zamplebox sticker and refer card/Liquid rating card with social media information on.

Under all of these marketing cards you find the standard Zamplebox green tissue, wrapping some green bubblewrap, with two green draw-tie bags with the liquids nicely placed inside of all of this. The liquids are always undamaged! The only issue I have found so far is the odd bit of liquid or sticky residue on some of the bottles when removing them.


First bag of juices opened and this is what I had received:

Quite excited by these first five liquids; they all looked nice by the labels and names and I couldn't wait to try them. Quick shake and sniff test on each of them proved interesting.
Where do I start? Three of the five liquids smelled pleasant, two definitely did not.
The two that did not were 'Blueberry church' and 'Mr Miyagi'.

The Eve Eliquids Blueberry Church had a weird smell, almost like a cheap blueberry alcoholic shot with a mysterious added extra! The Mr Miyagi from Adam again, had this awful floral/chemical/perfume smell which did not make me want to try it at all.  Fortunately,  the other three liquids had nice flavours. The Apple all day had a gorgeous fresh green apple smell, Nocturnal Banana smelled like ripe fresh bananas from the local fruit shop and the Amelia had a kind of cheese/strawberry smell to it which was slightly confusing. I was excited to try these three liquids out on my RDA's.

I dripped each one of these liquids on my RDA's (fresh organic cotton, single coil builds) to find the flavours and then check them against the flavour descriptions online to see if they were accurate or not. Below are my own personal reviews of these liquids through my own devices and taste buds. Different people have different tastes and opinions and these are my own.  All flavour descriptions were copied straight off the ZampleBox 'flavour bible', or somewhere else and it will have a 'source'.

After the initial smell test I was quite dubious to try this, as well as the Mr Miyagi liquids but did so anyway.  The shiny blue colouring in the liquid instantly turned my cotton green/blue and the smell was strong. There are no VG/PG ratios on the bottle, but it shows thats it's 6mg nicotine as well as having the ingredients and other warnings on the bottle. Now to try it. After letting the wick soak it up I inhaled what can only be described as a cheap chemical blueberry that was not pleasant to inhale with an awful tasting exhale which was God knows what! Not nice at all! The wick went straight in the bin and the bottle has not been touched since.

The online flavour description is..

"Blueberry on the inhale and chocolate on the exhale? What a heavenly combination! Like Bonnie and Clyde, Thelma and Louise, Frodo and Sam, and Calvin and Hobbes! Okay, you get the idea." - Source

Well..  I am actually lost for what to type here.  The exhale was meant to be chocolate? It was nothing like chocolate, in fact it was maybe the "chocolate" that was ruining the blueberry inhale.  Nothing was heavenly about this vape at all.  Also whilst on the above website getting the description(Eve liquids official website) I found out two things.  One, "Adam" is another liquid brand from them, Adam and Eve, I get it now.  Two, it was actually a 50/50 PG/VG mix.  I would personally not recommend this liquid to anyone unless you had vaped everything you owned and could not even get to your local Tesco/Pound Shop for cheap nasty liquids and this was all that was left.  BUT these are my own opinions and some people may like it..

Since learning about the Adam - Eve liquid connection and after the initial smell I wasn't filled with much excitement or hope for the actual vape of this liquid.  Clean wick installed after the Blueberry church dyed my other one and I couldn't get the taste to go away!  I dripped 1-2ml of the "Mr Miyagi" on, let it soak in and took a vape.  Instantly on the inhale I got this chemical/perfume flavour which is very overpowering and has a huge throat. The exhale wasn't any better, not good.  Again like the Eve bottle no PG/VG ratio just 6mg nicotine and the ingredients and warning information.

Erm.. Sweet, Lychee black (belt) tea? It certainly had a "sweet" element to it with the floral flavours.  What even is black belt tea? I guess the lychee is what is causing the floral overload, too much of it! If I knew what black belt tea was I may be able to pick it out of the inhale or exhale but there is just too much floral flavours.  Found out this was a 70/30 VG/PG mix again off the source above, why not just label this on the bottle so we know what it is.  AGAIN these are just my own personal thoughts on the liquid and some people may like this as well as the blueberry church.

From negative to positive finally.  Victory eliquids - apple all day passed the smell test and I couldn't wait to try this after the disappointment of the other two liquids.  Fresh build on a different RDA, letting the liquid soak in before I vape it.  Nice green apple taste on the inhale, slightly sour but still sweet. The exhale was very pleasant with nice apple flavours all through the vape with nice vapour production also, very happy with this eliquid.  Bottle is nicely labeled with fancy graphics and some safety information, again has bottle size and 6mg nicotine but no VG/PG information.

Very accurate description in my opinion, tastes exactly as its described a nice crisp green apple.  After doing some online research I have found this liquids is actually a 75/25 VG/PG mix.  I would recommend this juice to anyone who is after a plain green apple flavoured liquid that is going to be their all day vape.

Great banana smell, even nicer banana vape. Another nice simple flavoured liquid which has a pleasant inhale and exhale creating a nice all day vape juice.  Glass bottle again with no VG/PG mix mentioned.  I can't find any information on the VG/PG mix online which is weird.

Great description, not quite sure about the nutty finish as I  never had a hint of nut, whether its been on an RDA or in a tank-I get a fresh banana taste every time.  Recommend this also if you are after a fruity adv.


"The newest addition to the Jackson’s family is the intense yet subtle Strawberry known as an Amelia varietal. Very juicy and strong strawberry flavor but not overpowering." - Source

Well I certainly could smell the strawberry kind of from the bottle but it also had the cheese kind of smell. So I dripped a bit of this into another clean RDA for full flavour and it wasn't bad.  Had a subtly strawberry as mentioned but it wasn't a juicy or strong flavour at all. It was more of a weak strawberry jam possibly.  The weird smell of cheese wasn't there on the vape so my thoughts are that it was inside the bottle rather than the liquid itself.  Overall not the worst liquid I've ever had but not the best.

Overall
To wrap up the first part of this review(next six liquids in the next part) I wanted to again mention the fact that not all people like the same flavours and some people like floral, some don't, so the reviews above are my own personal thoughts and tastes.  Out of the five juices mentioned above my favourite was Victory Eliquids - Apple all day- just a pleasant all day vape with a true natural flavour.

I hope this post has been informative and helpful for you, don't forget to check out part 2 coming soon and if you want to comment with your thoughts on any of these liquids feel free to start a discussion :)
Posted by Unknown at 21:20